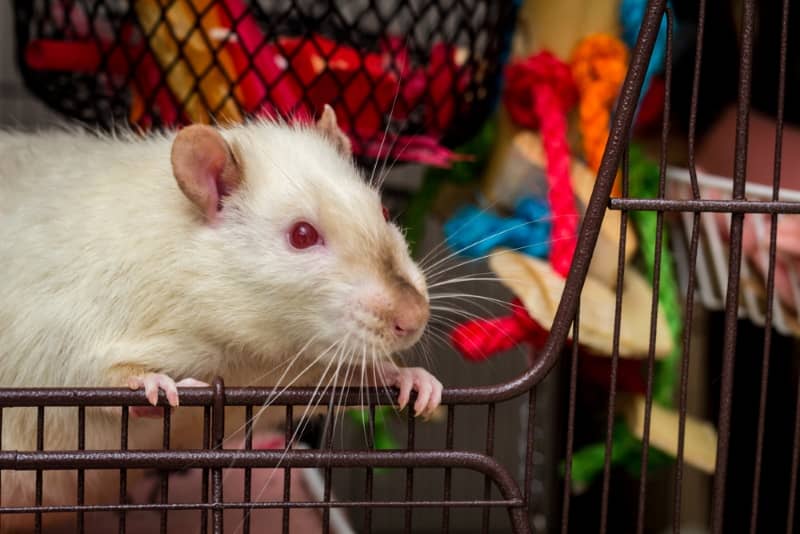 Pet rats come in lots of different varieties, but have you ever wondered why and how? Today’s article aims to demystify the genetics which give our rats different colors.

Let’s start with a few terms. A gene is a section of DNA that tells cells, proteins and enzymes what to do. Rats have about 25,000 genes, which are spread across 21 pairs of chromosomes – the DNA strands that are found in the nucleus of each cell. One chromosome in each pair is inherited from the mother and one from the father. That means that rats have two copies of each gene, one from each parent (the only exception to this is genes on the male sex chromosomes, as there is one X and one Y chromosome). Each copy of a gene is called an allele.

Not all alleles of a gene are identical – this is due to mutation of the DNA over time. That’s where the different colors come from – many genes that influence coat color have one allele that doesn’t change the underlying color, and one or more that does. The combination of alleles that a rat inherits determines how they look.

If rats (and we) have two different alleles of each gene, how do the cells know which one to obey? It turns out that not all alleles are equal. Some are “dominant” and over-rule others that are “recessive”. For a recessive gene mutation to show through, the rat needs two copies. When we talk about genes, dominant alleles are represented by a capital letter and recessives by a lower-case letter. As each rat has a pair of alleles for each gene, their genotype is written as a pair of letters – e.g. AA, Aa, or aa.

Modern science has shown us that genetics is actually a lot more complicated than that, and alleles don’t have to be purely dominant or recessive. However, most common coat colors in rats are straightforward, so we’ll stop the genetics lesson there!

Agouti is the wild coat color in rats – a brown color that comes from hairs that are banded with black, grey, brown and orange. We call the banding “ticking” and that is what gives the agouti color its depth and range of shades from orangey to greyish. It’s also what makes it so good for camouflage in the wild!

Agouti is coded for by a dominant allele, written as A. Rats with one or two copies of the agouti allele (AA, or Aa) look agouti, while those with two recessive alleles will be non-agouti (aa) and have solid color hairs. A non-agouti rat will be black if they have no other color mutations.

Agouti and non-agouti are the base colors for all our pet rats – but not all our rats are brown or black! That’s because several other genes have mutations that alter coat color. Most of these are called “dilutes” as they make the color paler. These are some of the most common:

As suggested by the name, this is the mutation that gives rats pink or bright red eyes. It works by stopping the brown and black pigments in a color showing. The red and yellow pigments aren’t affected and so the rat has a pale warm coat color.

Pink-eye dilute is a recessive allele, so a rat must carry two copies (pp) for it to be seen. If the rat carries just one copy, the diluted color won’t show, but it can pass the mutated allele on to its babies.

This recessive genetic mutation gives rats dark red or ruby eyes and makes their fur warmer and paler, but not to the same extent as pp. It works by altering the biological structures (precursors) that give rise to the pigment cells. This stops much black and brown pigment being deposited, making the yellow and orange colors dominant. Just like pp, the ruby eye mutation is recessive, so a rat needs two copies of the allele for the color to show.

An agouti ruby-eye dilute is a gorgeous rich ginger with a greyish tinge to the under-coat and is called fawn in the US and topaz in the UK, Europe and Australia. A non-agouti rat with the ruby eye mutation is a dark warm cream and called beige (US) or buff (UK, Eur, Aus).

Unfortunately, because the precursor structures altered by ruby-eye mutations are related to blood cells as well as pigment cells, some lines of ruby eye rats can have clotting disorders. This isn’t the case for all ruby-eyed rats, but if you are considering breeding, it is important to source these rats from experienced breeders.

There are several genes that have a mutated recessive allele giving mink colors – the US, British and Australian genes are all different. What they have in common is that they all have a mechanism that lightens the fur, but leaves the eyes black. In an agouti rat without other mutations, this results in a color called cinnamon which looks like a dark rich ginger agouti (my absolute favorite!) In a non-agouti rat, two copies of a m allele gives the mink color, which can range from a mid-brownish grey through to a dark steel. Mink is often mistaken for blue, but it can be distinguished by a brownish cast. In Australia, minks have heathered fur, with darker color to the tip of each hair. All the minks have a cute habit of molting at different speeds across their body. This creates splodges of darker and lighter color which are particularly obvious during the kitten moult.

The mink mutation (mm) can be combined with the ruby eye mutation (rr). These don’t seem to have official names in the UK and US (they are treated as variants of fawn/topaz and beige/buff), but in Australia they are known as argente if agouti based and dove if non-agouti based. The agouti-based rats are a rich ginger but with a cream under-coat, while the non-agoutis are a light grey-brown.

There is one common blue gene seen in the UK, America and Australia, which changes the protein that transports color pigment around the hair. Black and brown colors become a blueish grey, while reds and oranges become a cold-toned yellow. The gene is recessive and written as d (for dilute).

Non-agouti dd rats are called blue, and have solid color hairs ranging from a light powder blue through to a dark steel grey, depending on what the breeder has selected for. Agouti-based rats are known as blue agouti, and have a mixture of grey and yellow ticking in their hair. The overall affect is a paler, greyer version of agouti with a slightly yellow overtone.

Blue rats are extremely pretty, but they can have medical complications as the mutated protein that causes the color also has roles in other parts of the body. In particular, blue rats can frequently have clotting disorders. As for ruby-eyed rats, this isn’t a problem in every line. However, if you want to own blue rats, it is important to buy them from a reputable breeder.

This is a different recessive blue gene seen in the US, Europe and the UK, but not in Australia. It gives a darker grey color than dd in both the agouti and non-agouti versions, and doesn’t have any health problems associated. Like the Australian mink gene, it causes heathering in the fur with clumps of darker color appearing along the hair shaft.

Like mink, both blue dilutes can be modified if the rat is also showing ruby eye or pink eye dilute, but these don’t tend to have standard names. In all cases the presence of the blue genes makes the color greyer and colder than seen in the single rr mutation.

Yet another recessive allele (written b for brown!), the chocolate mutation is found around the world, although in many countries it is only available from show breeders. The mutation changes the black pigments to brown, with the ideal color of a non-agouti chocolate rat said to be that of Cadbury’s Dairy Milk! Chocolate agouti rats have a warmer and brighter color than normal agouti, but are darker than cinnamon rats.

Although albino rats have pink eyes, they don’t have the pink-eye dilute gene. Instead, albino rats can be any color genetically but carry two copies of a recessive allele which stops pigment from being produced. It’s written cc – the c stands for “chinchilla” which is the name of the gene involved. Other mutations of the same gene cause pigment only to show in the cooler areas of the body, resulting in the siamese and himilayan markings where color is only seen on the nose, ears and at the base of the tail.

All pink eyed rats have poor eyesight, and albino rats can also have a reduced sense of smell. Again, it’s a variety that is best sourced only from experienced breeders.

Where to find out more?

This article has only covered the most common colors widely found in pet rats. There are other, more genetically complex colors that breeders are working on, especially in Europe and the US. Good websites to read more are the AFRMA website for the USA and Hawthorn rat varieties for the UK / Europe.

5 Things to Consider When Cleaning Your Rat Cage

Welcome to Animallama, a place where experienced rat owners share all the tips they learned over the years of caring for their fur friends.