How to Entertain Your Guinea Pigs? 10 Enjoyable Games & Entertainment Ideas 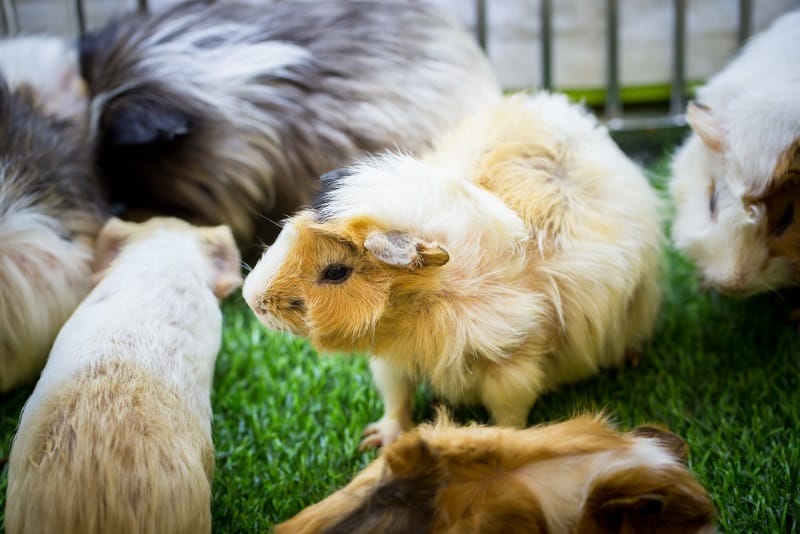 Not quite sure how to entertain your guinea pigs? No clue what games to play with your precious pets? Well, then, it’s a good thing you’ve found this post on games to play with guinea pigs and other entertainment ideas they’ll enjoy. Yes, indeed, your fuzzy friends will certainly have tons of fun playing the following list of games.

But, do keep in mind that these small, skittish creatures don’t like loud noises. As such, no matter how exciting or exhilarating it may be watching your guineas race madly across the room, please use a soft voice to encourage them while they play – as opposed to shouting out, “Whoohoo, YOU CAN DO IT!!” With gentle encouragement and calm movements, your pets will surely have fun while basking in the tender glow of your adoration.

Check out the following list of ideas and try them out one-by-one to see which ones your pets prefer. And, don’t forget – have fun! BTW for even more entertainment ideas, take a look at our list of toys guinea pigs love to play with!

As they are naturally curious creatures, guineas will often take the time to investigate new toys and structures in their habitat. It is this curiosity that will make the Hide n’ Seek game fun with your pets. Also, it’s a great way to build bonds with your piggies, especially if they’re shy or extra skittish. Use a blanket or sheet and hide behind it while they’re looking at you – so they know what’s going on and you don’t scare their pants off when they finally find you – and just poke your head out from behind the blanket once they come over to where you’re hiding.

The Food Challenge is a popular game used in zoos to mentally and physically stimulate animals, as well as provide entertainment – sometimes for hours on end. For this game, you’ll need some healthy treats and a pet-safe container – we suggest a paper towel tube. Bend or fold one end of the tube, then add in the treat so it’s stuck at the closed side of the tube. Then, lay the tube flat and let your pets figure out how to get to their yummy goodies. Paper towel rolls are a good option since they’re edible for guinea pigs.

While your pig isn’t exactly the hunting type – unless, of course, you count hunting grass or hay – they’ll have a blast chasing a stuffed toy, treat, or hay-filled sock. Simply tie one of these suggestions with a cord and drag it around the room in front of your pets. When they’re close and about to take a nibble, move it out of their way with a tug to get them to continue the chase. Do mind the cord, though, and make sure your pigs don’t get caught in it or have the opportunity to chew or swallow it.

It may take a while for your pets to get the idea of this game, but once they do, you’ll all be thoroughly entertained by the results. Use an old (clean) sock and add a small amount of hay inside, tying a knot so the stuffing doesn’t fall out. The smell of hay will attract the attention of your guineas, and eventually, they’ll be interested in nibbling the end of the toy. Give your end a little, gentle tug, then encourage them to pick up their side if they drop it. Usually, they’ll end up dragging the sock around their habitat in a one-guinea “Tug-of-War” game.

Crumple up a piece of paper or use a Ping-Pong ball and gently bat it around it front of your pets. This little game can prove to be a fun pastime as they push the ball around the room or their cage, rushing to steal it from each other in a mini soccer match.

Do you have guineas that come when they’re called? If you do, you’ll get lots of laughs with this homemade racing track. Create a track by lining up rows of low, heavy items that won’t tip onto your pets. Set your piggies at one end, then walk to the other end of the track and call to them. Alternately, as you’re holding them, you can show your pets that you’re placing a treat at one end of the track. Then, walk to the other side, place them down, and let them go. You can even try timed trials where your pets race each other, once they get a hang of the game.

Using a blanket, take your guineas on a (slow) carpet ride around the room or your home. If they seem to dislike this method of travel, that’s okay, you can use a pet carrier or just walk around with them in your arms. You’ll be able to give them a close-up view of your home and show them things that may interest them.

For this game, you’ll need several large cardboard tubes and some cardboard boxes – as well as some extra time on your hands. Cut the carboard tubes down the middle so there’s no chance your guineas will get stuck during the game. Once that’s done, attach the tubes and boxes together, building a maze. Or, you can just use several tubes to make a series of tunnels that interconnect, using duct tape to attach them. Without a doubt, your piggies will positively adore this game.

The Giant Labyrinth is, by far, our favorite game at my place. Similar to the Tunnel/Maze Building game, you’ll however require much more space for this project. Although I don’t build these often because they really do take up quite a bit of room, I’ve made about 3 of these over the years and they’re always a crowd-pleaser. What you’ll need is several large cardboard boxes and large cardboard tubes, the ones you’ll find at the post office or UPS. Yes, you’ll need to spend a bit of money for this project, but I normally don’t have to dish out more than $20 or so.

Again, cut open a straight line down each tube for safety reasons. Take the boxes and cut out holes, the same size as the width of the tubes. Then, use duct or packaging tape to secure the tubes and boxes together, forming a giant labyrinth – which can take up a fair share of space in a room. Once completed, you can add treats throughout the structure to encourage your pets to explore.

Here’s a game that satisfies a guinea’s constant desire to chew. Gather up a handful of hay, and either tie the center up with a string made of natural materials, like raffia, or use a 1-inch section of toilet paper roll to keep everything together. Create several of these bundles and make a low pile of them that your pets can climb, explore, and nibble.

How can you tell when your guineas are truly happy? Often, they’ll ‘wheek’ with glee – a high whistle of happiness. Other times, they’ll ‘popcorn’ – which is a hilariously entertaining display of hops, jumps, and half-spins. When you see such displays or hear their adorable wheeking, you’re certain to have chosen excellent games and entertainment ideas for them. Stick to our list of great ideas you’re sure to kill boredom at your home!

Do Guinea Pigs Make Good Pets? The Pros and Cons...

Welcome to Animallama, a place where experienced pet owners share all the pet care tips they learned over the years of caring for their fur friends.