Baby Rat Care: 6 Basics to Know When Caring for Newborns 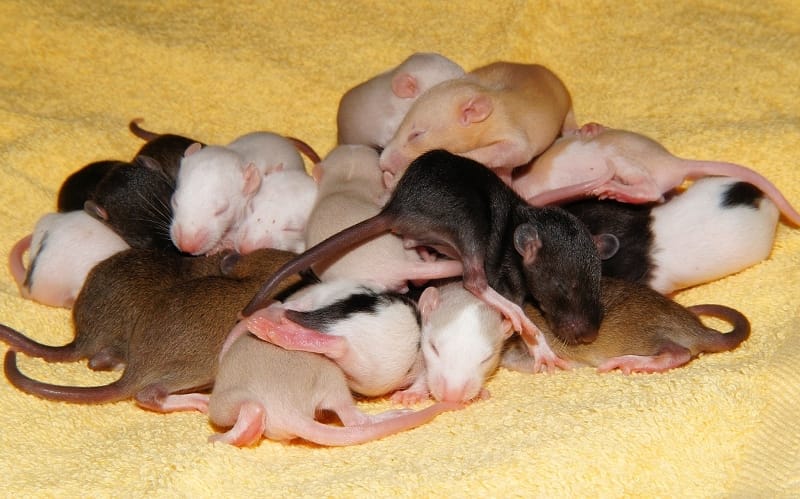 Most rat owners will either buy their pets as 6-8 week old fully weaned youngsters, or adopt them as adult rescues. However, occasionally we can find ourselves playing grandparent to a pregnant mum and her babies.

In March we agreed to take in two rats who needed emergency rehoming. The two were a boy and a girl, and although we were told they’d been kept apart, within a week it became clear they hadn’t as Miss L developed a very round belly. And carried on getting rounder and rounder, despite nearly dying of respiratory complications. Finally, and somewhat against the odds, she gave birth to 13 pink wriggly babies, and I was launched into caring for a lactating mum and her unplanned litter. Here’s how I handled it and what I learned.

Female rats will potentially make nests in very silly places, and babies wriggle about a lot. So the nursing cage should ideally have a deep plastic base to keep everyone in and sheltered. I used a cage similar to this; it is smaller than I’d keep a rat in full-time but ideal for a nursing mum. I took out all shelves, hammocks and baskets so mum couldn’t move her nest off the base, but I included some rope perches for her to play on in her down time, and a corner litter tray for her to toilet in. I put her cage in our bedroom so she wasn’t disturbed by household comings and goings, or the other rats.

Mums-to-be will usually make their own nest, and Miss L was no different. All I needed to do was give her suitable materials and let her get on with it. Suitable material in this case means non-toxic bedding that won’t get tangled round the babies. I opted for an enormous amount of torn up newspaper and paper kitchen towel.

Some people provide nest boxes for pregnant rats, and I think this is a good idea. I didn’t to start with as Miss L had made an enormous volcano shaped nest that took up most of the cage base, and I didn’t want to disturb it. However, actually finding the babies to check on them required dismantling and then reconstructing most of the nest. So on day 3, I transferred the babies, and the core of the nest into a cardboard box with a removable lid and two mummy sized holes cut in the side. Then I buried that back under some of her bigger sheets of newspaper. Miss L took to it immediately, and it made life much easier.

Read more: How to Bond With Your Rats: 5 Bonding Activities

There are conflicting opinions on when an owner should check on and handle newborn babies. Advised by friends with a lot of breeding experience, I opted to check on the babies on day one when they were a few hours old. I didn’t handle them, but when Miss L came out the nest for food, I put her out the way, and opened up the nest just enough to be able to check that the babies were alive and had milk bands in their bellies.

Baby rat skin is translucent, so if they are feeding ok, you can see little milky colored blobs where their tummies are. If the babies don’t have milk bands then it is a sign something is wrong – their mum may either not be feeding them or may not have milk. If that happens then get advice from an experienced breeder or a vet immediately. I also took the opportunity to check mum and make sure she didn’t have any infected discharge or continued bleeding. If she had, then that would have needed the vet.

Miss L didn’t particularly mind me being round the babies, and although she was an excellent mum in terms of keeping babies clean and fed, she really wanted to come out and play (the poor thing was only a 3-4 month baby herself). So, from day 2, while she was out the cage playing, I briefly handled the babies every day. To start with, I just held each one for a few seconds to check them over, as I didn’t want them to spend long outside their nice warm nest. After the first week as they started to get furry, I spent longer cuddling them until at between 2-3 weeks old they had their eyes open and were all for having playtime themselves.

A pregnant and nursing mum is eating for several, so she needs special attention paid to her diet. Some people recommend feeding pregnant rats a lot of extra food and especially protein. However, I was advised against this, as it can lead to the babies growing too big to comfortably birth. Instead, I fed her on her normal food (a grain based dry mix, some lab blocks, and daily fresh veg) supplemented a moderate amount of protein (mostly egg and chicken), and with access to sources of calcium (chicken bones and cuttlefish bones).

Once she had given birth, we increased the amount of food, and fed a protein-based wet meal every day (I scrambled a lot of eggs during that time) alongside her dry mix, lab blocks and vegetables. We also included some carbs with easy to access calories such as cooked rice and pasta. To be honest, it wasn’t very scientific, but it worked out well. Miss L is now a healthy sized adult and her growth wasn’t seriously interrupted by being pregnant very young, while her babies are all a good size for their age.

There are a few ways to tell the sex of a baby rat.

Before about 2 weeks old, the only option is to judge from the spacing between the urethral opening and the anus; boys have a longer spacing than girls. I made a guess based on this, which turned out to be right, but I wasn’t certain.

The next opportunity is between 1 and 2 weeks when the fur starts to come in. There is a window at this age where the nipple patches are visible on the girls. I was able to use this to sex accurately (6 girls, 7 boys).

The third opportunity comes between 3 and 4 weeks when boys start to develop testicles. From this stage onwards, it becomes pretty obvious.

Read more: How to Litter Train Your Rats in 3 Easy Steps

I let nature take its course when it came to weaning the babies. Miss L was an excellent mother and although the babies started eating her solid food at about 3 weeks old, she let them carry on having milk on demand. She got more casual about it with time – in the first two weeks of life she’s spend a lot of time in the nest nursing the babies, and making sure they were all safely tucked up in the warm. By three to four weeks when the babies were fully mobile little rats, it wasn’t unusual to see her climbing the cage bars with one or two opportunistic feeders hanging off her nipples.

Just before the babies were five weeks old, I separated the boys from the girls and their mum. It’s recommended to do this around 5 weeks to avoid further pregnancy; I decided to do it a few days early as I had no idea of the age of fertility in the line. That obviously completed weaning for the boys who moved straight in with their (by now neutered) daddy, and a couple of other big calm neutered boys.

The girls stayed with their mum and continued to feed from her occasionally for another few days. However, as soon as I moved them in with the rest of my girls (and another couple of neutered boys) that was it. Miss L decided she had done her job, and although she was friendly to her daughters as cage mates, from that second, she stopped all forms of mothering and focused on catching up on her own life.

Where to Get Pet Rats? Best Sources to Adopt Your...

Signs Your Pet Rat Is Sick Or Dying

This helps a lot but she keeps spazzing out and picking her babies up by the back legs to relocate them away from the nest. I let her play but she keep taking babies out and shoving them in towels and laundry baskets. I dont know what to do because daddy got loose and went wild and hes running around the room too. I found her missing 5 babies out of her 9 lastnight when I went in for baby head check and there was only 4. They were ice cold when I found them.. So could this behavior meen shes trying to find a place to put her babies because she could be pregnant again and trying to make room for another litter..??

Hi Hannah,
Does she have a safe cage with her nest in it? If so, it’s important to keep that closed up with the babies inside – the mum can come out for play, but it’s best to close the cage door behind her so she can’t move the babies (obviously this needs to be supervised so she can go back in the cage when she wants to). Lily had one episode of desperately trying to move her babies to under the sofa – I resolved it by taking her into a different space to distract her for half an hour or so (and of course collecting the babies and putting them back in the cage)
Daddy needs to be living in a different cage – if he’s loose and unneutered then it is important Mum doesn’t play in the same space.
As far as what she is trying to do, it maybe she is rejecting the babies, or it maybe that she is disturbed by the father being around in the same room (or by other disruption / noises) and is trying to keep them safe by moving them, but not doing a very good job of it. If she has had contact with the father since she gave birth then she could be pregnant again, but normally a mother would still raise her first litter and just wean them when she gave birth to the second.
I’d put Mum and the babies in a safe cage in a different room from the dad, not let her take the babies out the cage, although let her play without them if she wants to or becomes agitated, and see if she calms down with some stability. She needs plenty of good food available, especially if she might be feeding while gestating a second pregnancy.

Welcome to Animallama, a place where experienced pet owners share all the pet care tips they learned over the years of caring for their fur friends.