How Smart Are Rats? Facts Backed By Science & Our Personal Experience 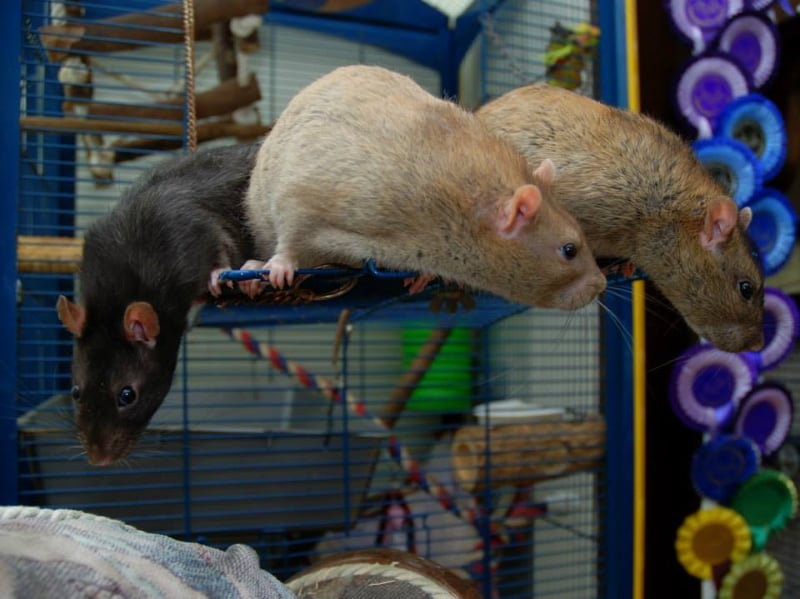 It’s generally agreed by scientists and rat owners alike that rats are pretty smart. But what do we actually mean when we say that? Are we talking about human-style intelligence with memory and forethought, or highly developed instincts?

Let’s have a look at just how smart rats are.

Can rats remember? I’m pretty sure the answer is yes – but to be scientific about it, we need to understand the difference between habit (sitting by the cage door at dinner time every day), familiarity (knowing who your owner is) and episodic memory, which requires being able to place the thing you are remembering in a context.

While that’s easy enough to understand in humans (familiarity is thinking you’ve seen that guy in the supermarket before; episodic memory is recognising him from your sister’s party last month), how on earth can it be tested in animals?

Researchers in the US solved the question by getting rats to learn different types of smell. They then gave the rats a treat if they recognised each smell in a particular context – in this case a pattern on the floor of the testing area. The rats aced the test, and showed they could remember at least 30 contextual events.

Are rats smarter than people?

In 2015, Belgian researchers created two learning tasks, and gave them to both rats and students to complete. Guess who came out on top?!

The tasks were based on recognising patterns. After being trained to recognise a “good” or “bad” pattern, the rats and humans were shown the patterns with some changes and had to identify which one it was. When there was only one type of change, humans and rats were about equal, but when the changes were in more than one dimension, the rats were quicker.

Why might that be? The researchers suggested it was all to do with the type of learning involved. Humans tend to learn by memorising rules – which in terms of patterns means our brains analysing the differences and looking for rules about how they change. Rat brains are a lot less complex. Rather than trying to understand the rules underlying the pattern, they visually pattern match, trusting their instinct – making them quicker at the task, and just as accurate. Sometimes a bigger brain just gets in the way.

For anyone who knows about the natural history of rats, this isn’t surprising – rats are one of the most adaptable animals on earth, thriving in complex, dangerous and changeable environments and literally taking over the planet. To be a survivor in that world you need to be able to make decisions instinctively, quickly… and accurately.

Ok, lab rats can do tests, but what about our pets?

Lab rats and pet rats are the same rat species, so our pets are potentially just as smart as their scientific cousins, especially if they’ve been bred for a lively curious temperament. Let’s look at some of the smart things pet rats get up to.

Mazes have been used in research with lab rats for years, but that doesn’t mean our furry friends don’t enjoy them. A network of corridors, tunnels and gates, and some food to reward the effort, and many pet rats will happily settle down to finding their way.

Being able to learn and remember makes rats expert puzzle solvers. They are bright enough to remember what strategies haven’t worked, and when they crack the puzzle, they remember what does. Puzzle toys designed for parrots can give rats hours of enrichment.

Just like dogs, rats can be trained to follow simple commands or gestures. By using a reward system or clicker training, you can train rats to pick-up objects, turn in circles, jump obstacles, climb, go through tubes, follow you, and a host of other activities. Of course, the rats prefer to look on it as training their human to play with them and give treats.

A popular recent idea at rat shows is an agility contest – scaled down table top versions of the courses dogs have been doing for years. Many rats take to agility naturally, as it combines the urge to explore with their trainable natures.

So far, we’ve mainly talked about things that rats enjoy doing if we give them the chance – puzzles, mazes and training. However, if you watch your rats closely, you’ll see lots of ways they show their smarts in everyday life.

Getting to know their humans

Most well-handled pet rats will happily interact with any human well-mannered enough to give them a cuddle. That doesn’t mean that they think humans are interchangeable. Pet rats know who their humans are, and they know who they like and who they don’t. What’s more they remember – one of my girls is a rehome from a loving owner who wanted her to live out her life with ratty company. The little doe has been happy here, but she’s not particularly cuddly with me or my husband. Then, a year after she moved in, her original human popped by for a visit – instant acceptance and licky cuddles.

Most rat owners will be familiar with the ratty habit of stashing – carefully putting all the best bits of food somewhere safe (aka the litter tray). However, rats can take their hording habits further. My little girl GB likes to put all her special things in a particular cardboard box, while Rincewind prefers to hide his precious items away in the base of the sofa. While both stash particularly tasty food for later (or in GBs case, to forget about until it has been eaten by a passing boy – she’s smart in particular ways and a bit dumb in others), they also hide away other objects. Things I’ve found include buttons, missing pens, chess pieces, big chunky screws, and most often, teaspoons. I don’t know why they want these things, but there is a whole decision-making process going on in the little furry heads.

Stashing is not always a random pile in a favourite place. Sometimes a lot of effort goes into organising the hoard. One of my boys from a few years back was notorious for always carefully putting his food away in many special places, carefully sorted by type and size.

Admittedly, the girl who with great effort and care deliberately buried her prize nut under the flabby tummy sprawl of the fattest boy in the cage was not being quite as smart as she thought!

Building a nest is one of the most common behaviours in pet rodents – we tend to take it for granted. But if you sit and watch one day, you’ll see how much effort – and intelligence – goes into it. First the rat has to find and choose the right materials, and they can be quite picky. Then they have to workout how to move their nesting material to where they want it. In our massive cage that can mean manoeuvring a whole sheet of newspaper across several meters, including through tubes, up the cage walls, and balanced across ropes. Only then can they begin building the nest, which for some rats might just be a torn-up pile of paper, but for others can be a complex woven structure

Hopefully you’re now convinced you’re sharing your life with some furry rodent masterminds. Understanding our rats’ intelligence isn’t just about knowing more about our pets – engaging that intelligence and making sure our pets aren’t bored is one of the keys to making sure they have a happy life.

Can Rats and Mice Live Together? Can They Live With...

Do Rats Have Bladders? What About Gallbladders?

Do Rats Need a Wheel? What Kind of Wheels Are...

What an interesting post. The rat who sorted and stashed his food by type is fascinating.

Welcome to Animallama, a place where experienced small pet owners share all the pet care tips they learned over the years of caring for their fur friends.